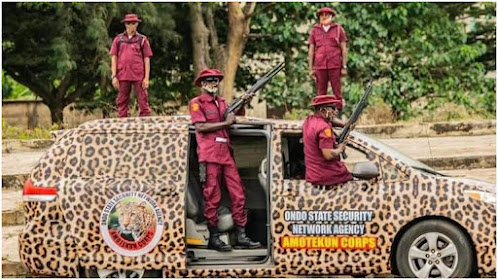 Barely a week after it paraded suspects for stealing and burglary, the Ekiti State Security Network Agency, Amotekun Corps have nabbed a notorious criminal Rasaq Bashiru and three other suspects for various crimes.

Parading the suspects in Ado-Ekiti, on Wednesday, the Corps Commander, Brig. Gen. Joe Komolafe, (Rtd), said Rasaq Bashiru, has been on the trail for various criminal activities.

He disclosed that Bashiru, an ex-convict who has served jail terms twice, is a kingpin of criminals known for stealing and burglary in the state.

His words: “The leader escaped that day and luckily we have been able to apprehend him and we interrogated him and he said he was released during the last leniency that they normally grant in June.

“When we arrested him yesterday, Bashiru Rasaq, we trailed him in the company of two other people, one Ajayi Toyin and Sunday Tunde in possession of Indian hemp.

“He confessed to going to Damleck Event Centre to remove armoured cables and sold it out. He confessed that they went to Ejon to go and pack goats.”

“The other suspect Niyi Komolafe was arrested at Omisajana and vandalised BEDC property at a Transformer and took armoured cable.”