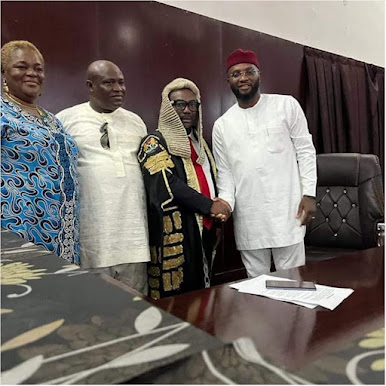 Nduka was sworn into office Monday during a closed-door special sitting presided by the Deputy Speaker, Mr Amarachi Iwuanyanwu (APC Nwangele) who called for nominations after reading the letter of resignation.

It was gathered that the new speaker was nominated by the Majority Leader, Mr Kanayo Onyemaechi (APC Owerri West) and seconded by Dr Uju Onwudiwe (APC Njaba).

He emerged as the fourth speaker of the ninth house following the impeachment of two previous speakers and Ibe’s resignation.

Recall that former speaker, Kennedy Ibe was sworn in on November 8, 2021, following the impeachment of Mr Paul Emeziem (APC Onuimo) for reasons ranging from forgery to high-handedness.

Chiji, however, appealed to the house to have his impeachment expunged from the legislative records and recorded as resignation, a request which was approved.