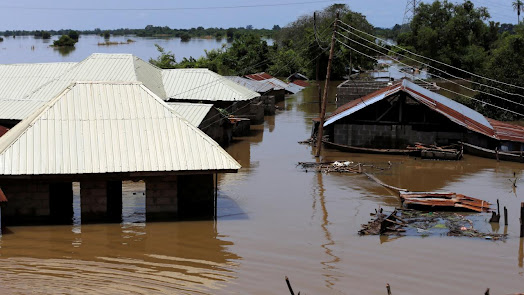 At least 1,000 families have been displaced, 60,000 farmlands and 500 houses destroyed by flood In Jama’are Local Government Area of Bauchi State.

Saleh Muhammad, a member representing Jam’are Constituency at the State House of Assembly, made the revelation during a plenary session.

He explained that five persons also lost their lives during a boat accident in the community.

According to the lawmaker, the displaced families were now taking shelter in schools, government buildings, mosques and neighbouring villages, explaining that 60,000 hectares of farmlands, with various crops worth several millions of naira were destroyed.

He called on the House to quickly urge the State government to come to the aid of the victims of the flood.

Saleh Bura explained, “Jama’are town and its surrounding villages had been hit by a very devastating flood that rendered several people homeless. The flood is estimated to have destroyed over 500 houses and displaced about 1,000 families.

“It also ravaged more than 60,000 hectares of farmlands and destroyed farm produce estimated at several hundreds of millions of naira.”

The lawmaker explained that Jama’are Local Government Area had been experiencing annual flooding during the rainy season, adding that the town was vulnerable due to the presence of a river in the area.

The Speaker, who presided over the plenary, emphasized that the motion required no further debate since members of the House had already discussed similar matters. The House unanimously adopted the motion.