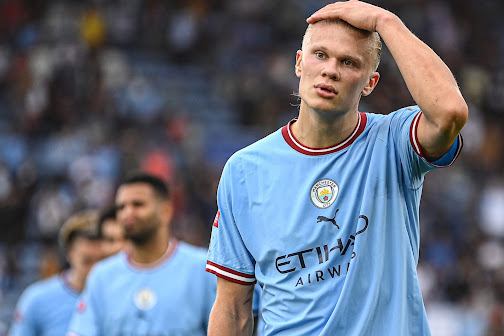 Haaland was on Bayern Munich’s radar earlier this year during his time at Borussia Dortmund, where he scored an incredible 86 goals in just 89 games.

The Norwegian impressed Bayern Munich chiefs so much with his Bundesliga performances that they tried to bring him to the Allianz Arena earlier this year.

Haaland also drew the interest of the likes of Real Madrid, Barcelona and Manchester United but the interest from Bayern appeared to irk the 22-year-old, who was targeted as a replacement for Lewandowski.

In a documentary entitled: “Haaland: The Big Decision,” Haaland said: “If I try to imagine how Lewandowski thinks… I don’t know how many goals and titles he has for the club.

Haaland added: “They [Bayern Munich] have shown interest, they have. I understand that they want to protect themselves. If he doesn’t end up there they will say, ‘it was never on the agenda, we already have the best striker’.”