I may become king after office – Gov Abiodun 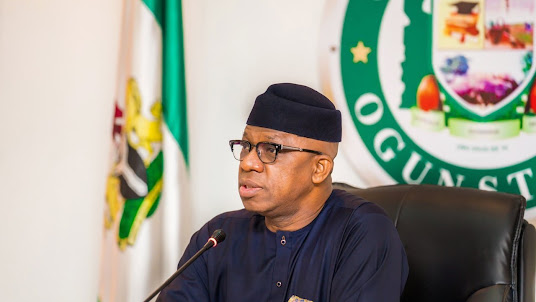 Governor Dapo Abiodun of Ogun State has hinted that he might become a traditional ruler after leaving office.

Abiodun, who reemphasized that he is a prince from a royal family, said he might go and search for the crown and join the league of traditional rulers in Ogun, who he said he envies because their reign is till death.

The governor disclosed this while addressing traditional rulers at a meeting in Joga Orile, Yewa North Local Government Area of Ogun State.

Abiodun said the Ogun West monarchs, led by the Eselu of Iselu, Oba Akintunde Akinyemi, had visited his office to inform him of their decision to endorse his second term ambition.

According to Abiodun, he had insisted that the endorsement be done within the domain of the monarchs, who tagged themselves “The Trusted Royals.”

“When the executive of The Trusted Royals muted the idea that they wanted to endorse me, I said let me come to your domain for the endorsement.

“You know that I’m also a prince. Maybe after I leave office, I will now go and sit down and think of how to go and carry my crown somewhere. So that I will be crowned an Oba in my retirement,” Abiodun said.

The governor said, “We must always give you (Obas) the regards due to you. I, particularly, understand the roles of Obas in governance. You’re the closest to the grassroots. You’re the custodians of our varying reach culture and traditions. You’re the ones that feel the pulse of our citizens. You know them better than we do, and we must ensure that we continue to consult with you.

“We must accord you the importance and the relevance that your throne deserves.”

The Iperu-born Abiodun said the governor’s office, though highly exalted, does not confer on him the status of an emperor or a king that cannot be questioned.

He maintained that the governor is only the custodian of the powers vested in him by way of an election to allow him to govern over his people democratically.

“This office does not say I cannot be questioned. I am a servant leader; and I am tenured, unlike you. I’m very envious (of you), I’m tenured. Some of you have been on your thrones for years. I know Kabiyesi Awujale has been on the throne for over 60 years.”

Abiodun said he is cognizant that his position is transient, saying he would not take it for granted.

“I’ve promised to serve the people of Ogun State very diligently. I will be fair, I promise to be just, equitable and I promise that no part of this state will be developed at the expense of another part,” he stated.