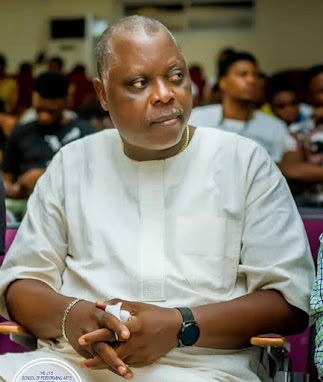 Veteran Nigerian actor, Dele Odule, has said he might quit his acting career for real-time politics if that is the only way to fight for the right of his people in Oru Ijebu.

Dele Odule spoke in an interview with newsmen, explaining why he joined the Peoples Democratic Party (PDP) in Ogun State.

He claimed his community in Oru, Ijebu North Local Government Area of Ogun is currently being trespassed by the people of another community but no one seemed interested in doing anything.

The thespian explained that the many cries of his people had been falling on deaf ears as those who should wade into the issue between the two communities are paying no attention.

He explained that he joined the PDP when the party’s governorship candidate, Ladi Adebutu assured him that his administration when elected, would wade into the matter to avoid a total breakdown of law and order.

However, Odule said he would quit if his desires are not met by the PDP as promised; saying that an entertainer is not supposed to align with any political group.

He maintained that Adebutu, while in the House of Representatives, sponsored a bill that would have had a positive impact on the nation’s entertainment industry.

“But let me tell you why I have decided to pitch my tents with the PDP. Wherever your treasure is, you have to guard it jealously.

“As an entertainer, I remember that when Adebutu was at the lower house of the National Assembly, he tried for the entertainment industry because he actually sponsored a bill that would have affected the entertainment industry positively. If he had remained there, I’m very sure that the bill would have been passed because it has gotten to the second reading. I was at the National Assembly myself when I was the President of TAMPPAN.

“Anybody that is ready to support entertainment in Nigeria, definitely that person will be my favourite. That’s the bitter truth.

“Secondly, I don’t like where people are being cheated unnecessarily. I am very sure that you have come across this thing that is going on between Ago Iwoye and Oru. It is not because I’m from Oru in Ijebu but I would have expected the government of Ogun State to wade in by now.

”I don’t believe in communal war or clash but if someone is infringing on another person’s territory and for many years and the Oru people went for a press conference to say the government should wade into this matter because Ago Iwoye is actually infringing and encroaching on the land of Oru Ijebu, the state government should have intervened by now.

“It’s over two weeks now and yet nothing is coming out. So I want to believe that any party that actually romances me that if I’m part of them they will make me have a voice and make an impact, I will go, regardless of the name of that party. I don’t care about any party this time around, I just want to make my impact felt. If I get there and they didn’t meet up to my expectations, then I will quit, nothing stops me from quitting; quote me!

“I’m a very practical person. If I get there and the needful is not done, I will leave. They have given me a platform to come in first, no other party have done that in the past. I’ve never been a politician, I was not ready to be a politician but these people said if I’m part of them, they will give me every opportunity to voice my mind and I said okay. If I get there and my voice is not respected and I know I’m actually saying the truth, then I will quit. If not because

“I will fight for the entertainment industry and for justice till I die. My mission is to save my people, give them a voice and to prevent Ago Iwoye from infringing on Oru land. I would have done that for any land, even if it is Yewa. If it Ilaro encroaching on Iwoye, if it Would encroaching on Oja Odan, I would have said and done the same thing. It’s not because Oru is my town.”

Asked to comment on the government of President Muhammadu Buhari, Odule said, “Let me just tell you frankly, I know the problem of Nigeria is not about leadership alone, the followers also have their own take and that’s the bitter truth. We have bad leadership no doubt about that, but we also have bad followership.

“I don’t want to assess any government because I’m not part of the government. If I am an insider I will know what is happening inside and I will come out and be practical and I will say the truth.”