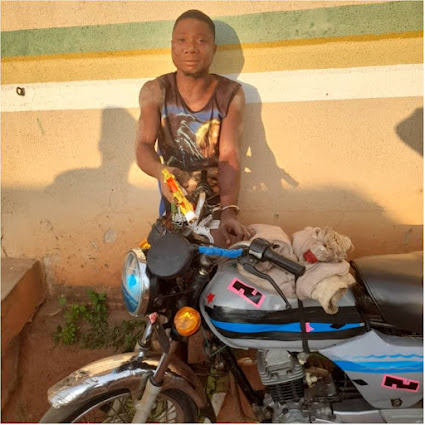 The State So-Safe Corps in Ogun State has arrested a suspected armed robber while attacking a commercial motorcyclist in Idiroko.

The suspect, 22-year-old Ibrahim Oluwaseun, a resident of Olorogbo Compound, Asheko/Ibatefin Area of Ipokia Local Government, Ogun State, was arrested on Friday by operatives of the So-Safe Corps.

Oluwaseun was said to have pretended to be a passenger, as he hired the okada rider, Bamidele Mujeeb, to convey him from Aferiku Street, Idiroko to Obalana Street, along Bebe road, leading to the Republic of Benin.

A statement from the office of the State Commander of the So-Safe, Soji Ganzallo, through the Director of Information and Public Relations of the Corps, Moruf Yusuf, said the suspect, who was on a robbery mission, later instructed the bike man to go through a narrow route that leads to the same destination.

“The suspect then brought out a gun, later discovered to be a toy gun and commanded that the rider surrender himself and the bike or lose his life.

“At the scene, the So-Safe patrol team, Idiroko division, led by CSC Abdulkareem Muhammad, who witnessed the funny act, pounced on the suspect and got him arrested,” Yusuf said.

The corps spokesman said, “the suspect confessed to the crime during a preliminary investigation.”

He added that the suspect, his victim, the motorcycle and the recovered toy gun have all been handed over to the police at Idiroko divisional headquarters for further investigation and likely prosecution.

Meanwhile, the Ipokia Area Command under, ACC Yusuf Aliu and the divisions under it have been put on their toes to curb the series of crimes by some okada riders and to put a stop to miscreants attacking law-abiding bike riders.