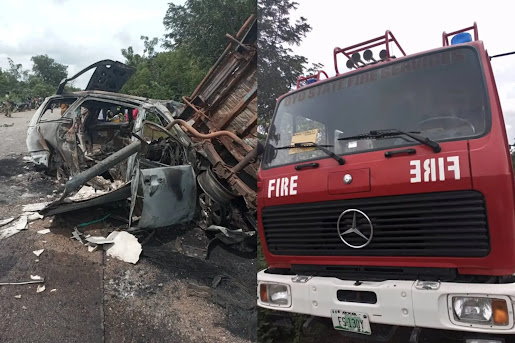 The Oyo State Command of the Federal Road Safety Corps (FRSC), has confirmed the death of no fewer than fifteen persons in a road accident that occurred in the Ibarapa area of the state.

Saga Gist recalls that two vehicles were reported to have collided at Maya junction in Ibarapa East local government area on Saturday resulting in a fire.

The incident which reportedly happened around 2.05 pm on Friday resulted in the death of an unspecified number of passengers.

The FRSC has, however, confirmed that 15 people lost their lives in the accident.

FRSC Sector Commander, Joshua Adekanye who made the disclosure on Saturday, said the accident “involved two vehicles at Maya junction”.

He said, “the two vehicles, a Toyota Sienna Bus and Toyota Hiace, had a head-on collision resulting in the fatal accident”.

“All the 15 persons involved in the accident were burnt to death”.

He added that the bodies of six of those killed were immediately recovered by their families.

The remaining bodies according to him were deposited at General Hospital Eruwa.