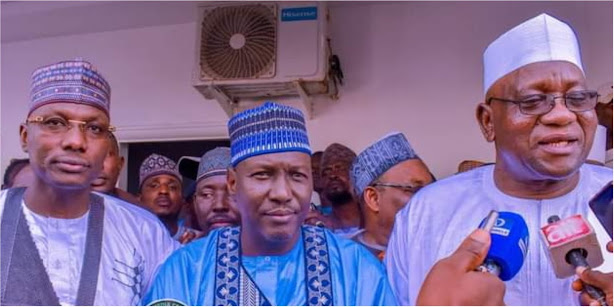 The Peoples Democratic Party PDP in Katsina State on Saturday visited the erstwhile Secretary to the State Government, Dr Mustapha Inuwa to canvass for his support ahead of the 2023 general elections.

The PDP governorship candidate, Yakubu Lado, along with the state party chairman, Yusuf Majigiri, led other party faithful to the Mustapha Inuwa campaign office in Katsina metropolis where they appealed to him to bury the hatchet and join the party to rescue Nigeria from its present quagmire.

Inuwa who lost the APC gubernatorial ticket to former SMEDAN Boss, Dr Dikko Umar Radda is said to be unhappy with the conduct of the governorship primary election held earlier in the year.

Lado in his address described Dr Mustapha Inuwa as a political force who left the PDP for one reason or the other and urged him to forgive and forget, promising that the party will right all wrongs done to him in the past.

“We know your strength and capacity. We know what you can do and we are hoping that you will join forces with the PDP to fix the country.

“With your support, by God’s grace, PDP will be more formidable and will be able to win Katsina State from top to bottom.”

In his response, Dr Inuwa thanked Lado and his team for the visit and the confidence reposed in him by the party.

While noting that there are neither permanent friends nor enemies in politics but interest, he urged Nigerians to elect leaders who can correct the ills bedevilling the country.

The former SGS promised the PDP delegation that he will deliberate with his supporters and revert to them as soon as possible.

The Katsina PDP Chairman, Salisu Majigiri thanked the former SGS for the warm reception, assuring him and his support base of equity and fairness if he returns to the party having been unduly treated by the APC.