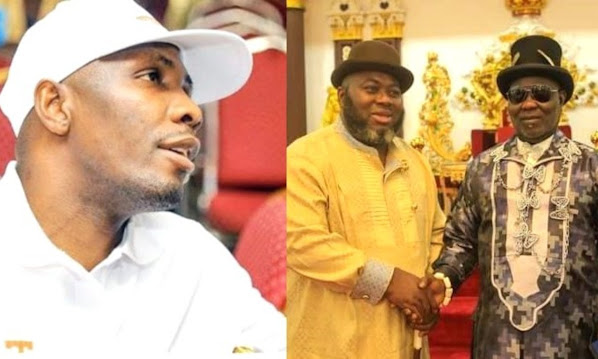 The pipeline surveillance contract awarded to Government Ekpemupolo, popularly known as Tompolo, has caused apprehension in the Niger Delta.

Despite an initial stiff stance, the President Muhammadu Buhari administration engaged Tompolo due to increasing oil theft in the region.

The deal was sealed by the Ministry of Petroleum Resources and Nigerian National Petroleum Corporation (NNPC).

Nigeria was producing around 1.6 million barrels per day as of July 2021. However, by July 2022, the output had dropped to around 1.1 million.

The worrisome 500,000 deficit forced the country’s leadership to act as it seeks funds to finance the proposed 2023 budget of N19.76trillion.

The government is targeting nearly N2trillion from oil-related sources for the budget premised on 70 dollars per barrel and an exchange rate of N436 to the dollar.

But the decision to recruit the ex-commander of the defunct Movement for Emancipation of Niger Delta (MEND) provoked former militant leaders.

Top on the list of those infuriated are HRH Ateke Tom (Amanyanabo of Okochiri Kingdom) and Mujahid Asari Dokubo (Edi Abali 1 of Kalabari), whose supporters have threatened war.

Dokubo has been more vocal, questioning why another person was employed to guard the 83 kilometres of pipelines in his Kalabari territory of Rivers.

Tompolo is from Delta. The chief priest of the Egbesu deity is a High Chief of Oporoza, the traditional headquarters of Gbaramatu Kingdom.

Prominent Itsekiri leader, Chief Mrs Rita Lori-Ogbebor believes the authorities were wrong to have handed the pipeline security job to only Tompolo.

The Igba of Warri Kingdom said the insecurity Nigerians should worry about “is not the type going on in the North, but that of the Niger Delta”.

“What we have today will be a child’s play if the insecurity fully manifests. If it has not, it will soon do so in another few months”, Rita Lori asserted.

But an Ijaw leader, Dr. Clarkson Aribogha said violence won’t solve the issue, and advised Dokubo and others to make peace with Tompolo.

Aribogha further informed Dokubo that the government does not give contracts to a person who is uninterested or did not apply.

“Contract award is never by political appointment or civil service recruitment, but based on fulfilling requirements – integrity, capacity, trustworthiness and acceptance.”

Aribogha added that the government would not give anybody a job “by coercion” but on recommendation “especially on security matters”.

It was gathered that Niger Delta leaders are rallying to forestall a major conflict that could disrupt the relative peace in the zone.

The Ijaw National Congress (INC) set up a committee to investigate the disagreement over the contract and would work on the report to ensure an amicable solution.

The Professor of sociology appealed to them to sheathe their sword for the sake of the people and not to jeopardize efforts on revenue generation.

“The federal government is following events and has urged influential and respected personalities to end the squabble by reaching out to warring factions”, a source hinted Sunday night.