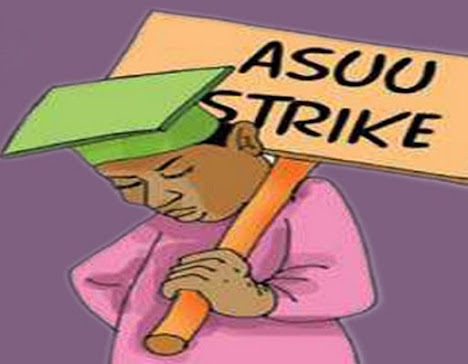 Nigerians, especially University students and their parents wait with bated breath as legal fireworks begin today, Monday, in the suit filed by the Federal Government against the Academic Staff Union of Universities, ASUU.

Saga Gist recalls that the Federal Government has filed the suit before the National Industrial Court, seeking an order of court to compel the lecturers to resume work.

However, the Court adjourned the suit today, Monday, September 19 for a hearing of the interlocutory application of the Federal Government.

As previously reported, some of the contentious issues that led to the strike by the union include the non-release of revitalization fund, earned academic allowance, renegotiation of the 2009 Agreement, release of white paper on visitation panel, non-payment of minimum wage arrears and the inconsistency occasioned by the use of the Integrated Payroll and Personnel Information System, IPPIS.

Saga Gist reports that the FG decided to take the matter to court over what it termed ASUU’s recalcitrant and unyielding stand to the offers it has made to the union.

The Court had previously adjourned the case twice. The first was September 16, but when the matter came up to be heard on the scheduled date, it was again adjourned by the court to September 19.

Justice Polycap Hamman said the adjournment was to enable both parties to file the necessary papers for the suit. The counsel to FG, James Igwe, had earlier asked the court to give the suit an accelerated hearing due to the urgency of the matter to enable the students to return to school.

Igwe told the court that since the matter was already in court, it would be proper for the strike to be called off, pending the determination of the suit.

LIke it is always said, when two elephants fight, the grass suffers. In this case, both the students and their parents/guardians have been at the receiving end of this action.

Most of the respondents, who spoke to newsmen, expressed their disapproval of the FG’s decision, a similar stand taken by the Catholic Bishops’ Conference of Nigeria, which faulted the FG for going to court.

Mrs Grace Ozazuwa is a widow who recently lost her job in one of the first generation banks after sixteen years of service, said that all she has wanted was to see her two daughters make it to the university, but the dream is receding quickly in her own eyes.

She lamented the mental depression her daughters had been passing through since the strike.

“I don’t expect anything positive to come out of it, it’s just a delay tactic by the government to buy time, seeing that it can’t meet the unions’ demands. I don’t see any chance of making progress from here.

“My daughter has been at home for more than seven months waiting to resume as a first year student but it seems the wait may linger till another year.

“It is just too much for her to bear the brunt of a failed government which cares less about its subjects”, she said.

Dr Samson Ugwoke, an entrepreneur, couldn’t hold back his anger against the government.

He blamed the government for the crisis in the education sector. He is of the opinion that the outcome might not lead to ending the industrial action by the union.

“If you look at the way this government has treated education, your guess is as good as mine.

“If I were in a position to advise the government, I wouldn’t have supported the idea of taking ASUU to court. I don’t think it will change anything. Even if the decision of the court goes against them, they may even refuse to obey it,” he said.

Speaking to the newsmen, Calistus Onyeka, a taxi driver, who runs his service at the University of Nigeria, Nsukka, Enugu State, questioned why the government should head to court, when it doesn’t obey court orders.

“Let me ask you, does the government obey the court’s judgement? They don’t. So why are we deceiving ourselves?

When our reporter sought the view of a senior lecturer at the University of Abuja, who didn’t want his name mentioned, he showed no sign of giving up the struggle amidst the unpaid backlog of salaries by the government.

He would rather see the end of it than surrendering at this point.

He said, “I think it was a wrong step in the first place taking us to court. It is an issue that could be settled without resorting to conventional court. But in so far as they have thought otherwise, we don’t have anything to say but watch them and meet them in the court.

“Government should know ASUU has come a long way in this struggle. When we get to the bridge, we will know what next would be appropriate to do. There’s no need to guess at this stage. Let the court make its decision first, then we take it up from there.

“I think I am not worried. Every other academic is not worried too, except those who don’t know what the struggle is all about. Our fight is a genuine one”.

Meanwhile, there have been feelings that the government might seek an out of court settlement, following the advice by the committee of Pro-Chancellors to President Muhammadu Buhari to soften his stance on some of the contentious issues holding back the resolution of the crisis.

The extent he would accede to their demand is yet to unfold.