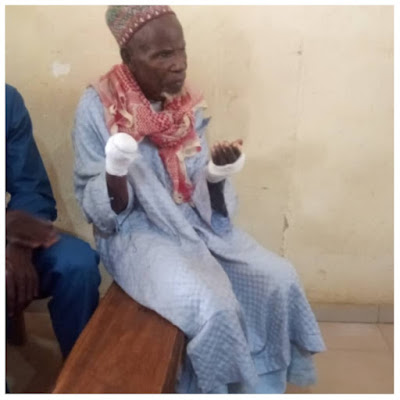 Two herdsmen are currently cooling their heels in the custody of the Niger State Police for allegedly amputating the hands of their father, aged 60.

They are being detained on the orders of a Minna Chief Magistrates Court till 26 September, 2022.

The duo Bello Usman 25, and Shehu Abubakar also, 25, conspired along with Shede Umar and another simply identified as Kai both presently at large to commit the heinous offense.

Earlier, the suspects were arraigned by the men of State Criminal Investigation and Intelligence Department (SCIID), on two-count charges which include criminal conspiracy and causing grievous hurt, contravening section 97 and 246 of the penal code.

The suspects told the court that the initial plan between them and their partners in the crime was not to chop off their father’s hand, but only to rustle his cattle.

The Chief Magistrate, Hajiya Fati Hassan Umar then directed the police to go after the other two fleeing culprits to be arraigned and face the law.

The 60-year-old victim was conveyed to the court from the hospital where he was receiving medical attention.

Meanwhile, the father and the guardian of the fleeing suspects, who were summoned by the presiding Chief Magistrate, were ordered to produce their wards in court in the next sitting of the court fixed for the 26 September, 2022.