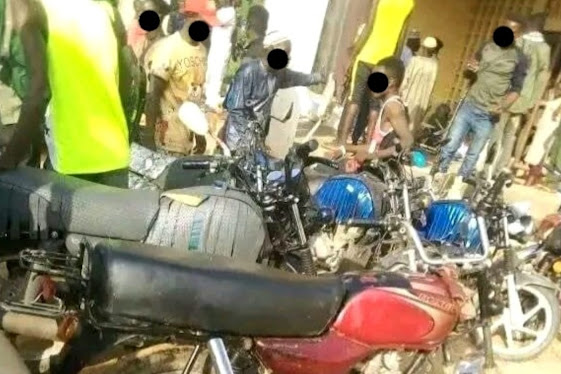 A notorious terrorist, popularly called Solar, was among those killed by the Civilian Joint Task Force (CJTF) this week.

The CJTF operatives in the Batsari Local Government Area of Katsina State foiled an attack after a gun duel.

They killed nine terrorists, arrested five others, and recovered nearly all the motorcycles used by the invaders.

On Tuesday, a video showed the moment Solar was decapitated after he was shot dead in Batsari town.

The vigilantes cut off the bandit leader’s head and moved around the community with it amid cheer by residents.

The annihilated outlaw led a number of assaults in parts of Katsina, including the Jibia axis, before he finally met his waterloo.

It was gathered that he was named Solar because he daringly operated during the day most times.

Social media users hailed the gallantry of the CJTF, though some fear that their action may have consequences if the deceased’s colleagues decide to carry out reprisals.

Batsari and nearby villages have been attacked by bandits severally in recent years, leaving scores of locals dead and others injured.