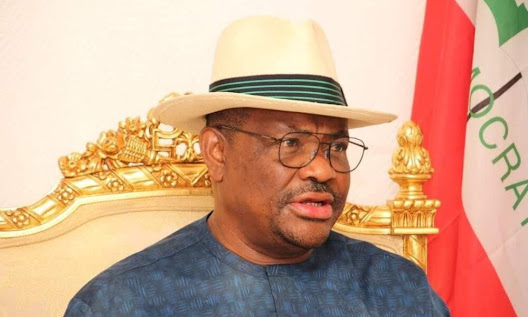 Gov. Wike was speaking at the commissioning of internal roads in Omerelu community in Ikwerre local government area of Rivers State accused Ayu of arrogance on Thursday.

The governor was responding to comments credited to Ayu, allegedly describing some aggrieved members of the party as “Children”.

Wike regretted that instead of finding ways to unite the aggrieved members of the party, Ayu is busy ” dividing” the party.

“Ayu, you were impeached as the Senate President. Arrogance cannot take you to anywhere.

“I had kept quiet thinking that we will reconcile but since you brought arrogance to say you were elected where did you campaign, show me where your poster was in this state.

“He is telling us that we are children, a man who is inconsistent and ran away from the party, telling those of us who spent our time to make sure this party doesn’t go down, now has the audacity to tell us we are children, we will tell you, you are the prodigal father