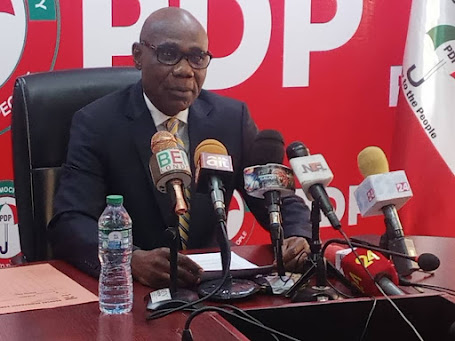 Debo Ologunagba, the PDP spokesperson, made the remark while stressing that Tinubu was a paper candidate who is confused.

Ologunagba disclosed this in a series of tweets.

Describing APC as a dead party, Ologunagba said PDP is united and focused on its mission of rescuing Nigeria.

According to Ologunagba: “Nigerians are appalled by yet another attempt by the Presidential Candidate of the All Progressives Congress, Asiwaju Bola Ahmed Tinubu, to divert attention from the main issues of the failures of the APC government by making derogatory remarks on the Peoples Democratic Party

“Such fixation on the PDP only exposes Asiwaju Tinubu as a paper candidate who is confused, nervy and intimidated by the PDP’s Presidential candidate, Atiku Abubakar and the achievements of the PDP, which stare him in the face in mortal fear of failure ahead of the 2023 elections.

“Unlike the APC that is dead, the PDP is not only alive and existing as acknowledged by Asiwaju Tinubu in his statement, but also strong, united and focused on its mission to Rescue, Rebuild and Redirect our nation from the misrule of the APC.”