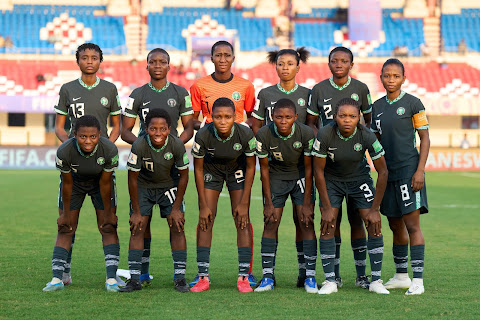 Nigeria’s Flamingos sailed into the quarter-final at the 2022 FIFA U-17 Women’s World Cup following a 2-1 win against Chile on Monday afternoon.

The Flamingos finished second in their group with six points.

Bankole Olowookere’s girls needed just a point to advance to the knockout round but attacked their opponent from the first minute.

Blessing Emmanuel, who captained the team in the absence of Alvine Dah-Zossu fired Nigeria in front on four minutes following an assist from Opeyemi Ajakaye.

The Flamingos were unable to add to their lead for the remainder of the first half.

Bustamante Paloma came close to equalising for the Chileans three minutes after the break but her effort went wide.

Ajakaiye’s brilliant effort hit the crossbar 15 minutes from time as the Flamingos searched for the second goal.

The Chileans were awarded a penalty late in the game after Josephine Edafe was adjudged to have handled the ball inside the box following a VAR review.

Maitte Tapia slotted the ball home to halve the deficit for the South Americans.

The Flamingos will face either Brazil or the United States of America in the quarter-final in Mumbai on Friday.