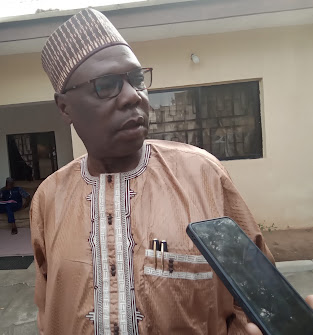 The Adamawa State University, ADSU, Mubi, has announced a new acting Vice Chancellor in the name of Dr Stephen Lagu.

This came Thursday evening after a meeting of the University Council during when outgoing Vice Chancellor, Professor Kaleptapwa Farauta, tendered her resignation.

Chairman of the University Council, Dr Awwal Tukur who addressed newsmen after the meeting, explained that the Council arrived at appointing Dr Lagu as VC in an acting capacity after it accepted Farauta’s resignation.

He said Farauta had to quit as VC to assume effective campaign as the Peoples Democratic Party, PDP, deputy governorship designate in the state.

Saga Gist recalls that Farauta had earlier been picked as running mate by Governor Ahmadu Fintiri who holds the 2023 governorship ticket of the PDP.

Farauta’s choice had been informed by the emergence of a woman, Senator Aishatu Ahmed Binani as the state governorship candidate of the main opposition All Progressives Congress, APC.

Awwal Tukur said Farauta had to resign from her position at the university as legally stipulated, but that her resignation takes effect from December 31, 2022.

“The acting VC is to assume duties on January 1, 2023,” Awwal said, adding that the process of electing a new substantial VC would be kickstarted in no distant future.

The new acting VC who was born in 1959, holds a BA. Ed., in English and a PhD in English for Specific Purpose.

He had previously held the position of Dean of Education before becoming DVC Administration and now acting VC, in the same university.