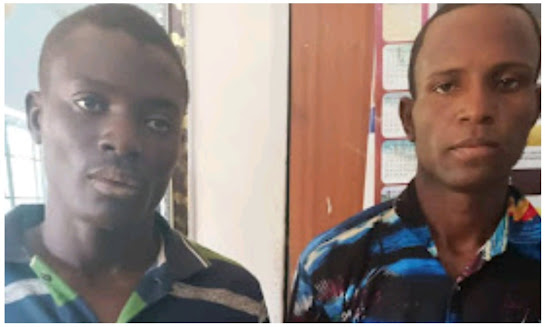 A youth in Adamawa State, Nura Mohammed, has confessed to masterminding the theft of a new motorcycle because he needed something to sell to raise money for his wedding.

The detail has also come out about how he and his accomplice, Muhammed Bello, lured their victim to the spot where they took his motorcycle from him.

The two men, who the Adamawa State Police Command has apprehended for snatching the motorcycle in Fufore Local Government Area, made their revelations to the state Police Public Relations Officer, SP Suleiman Nguroje.

Nura Mohammed, 20 and Muhammed Bello, 24, who hails from Modire in Girei LGA, and Jili Unguwan Wakili from Fufore LGA, respectively, confessed to the crime and pleaded for mercy.

Nura, a commercial motorcyclist, who said he had masterminded snatching the motorcycle to raise money to marry a girl he had been going out with, pleaded with his girl to exercise patience and to understand that he did it for their relationship.

He asked the law for forgiveness, as it was the first time he would commit such a crime.

On his part, Muhammed Bello said Nura called him on Sunday, December 18, and reminded him about their plan to snatch a motorcycle.

He said that they left on December 19 for Fufore LGA, where they hired a commercial motorcyclist whose motorcycle was new to take them to Parda in Fufore LGA.

He said that while all that was going on, three people appeared on a motorcycle trying to cross the river and that he threatened them with his machete, asking them to pass quickly.

“Out of fear after seeing the machete, the operator of our targetted motorcycle took to his heels for his own safety, abandoning his motorcycle,” Muhammed Bello said, adding that Nura then rode the motorcycle to Yolde Pate in Yola South LGA, where he hid it in the house of their friend.

Bello revealed that he was arrested on Tuesday, December 20, by a team of vigilantes and that he was compelled to take the team to arrest Nura Mohammed, following which they landed in police net.