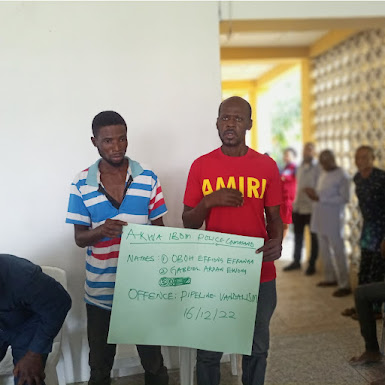 The Akwa Ibom State Police Command on Friday paraded one Akaninyene Sunday Okokon who allegedly beat his 16-year-old daughter to death for using his phone to call her boyfriend.

Commissioner of Police Olatoye Durosinmi in a press conference at the command’s headquarters in Ikot Akpanabia, Uyo, Akwa Ibom State capital, said: “On 11th December 2022, relying on credible information, operatives of Ikot Ebo Divisional Headquarters arrested Akaninyene Sunday Okokon who beat up his daughter, Abasiono Akaninyene Sunday, age 16, for using his SIM card to call her boyfriend. The victim fainted and was rushed to a prayer house at Ikot Iya village instead of being taken to a hospital.”

The suspect during an interview admitted to the crime.

The CP also mentioned the arrest of a syndicate responsible for pipeline vandalism.

He disclosed: “On 16th December 2022, at about 14 00hrs at Inua Eyet Mkpanak Village in Ibeno Local Government Area, SIB operatives arrested some members of a syndicate that specialized in vandalizing petroleum pipeline.

CP Durosinmi alleged that the quartet and others at large were responsible for the vandalisation of a pipeline belonging to Energy Oil Nigeria Company on the 16th of October 2022.

While he reiterated his commitment to making Akwa Ibom safe, the Commissioner of Police averred that the suspects would be charged to court as soon as investigations are concluded.