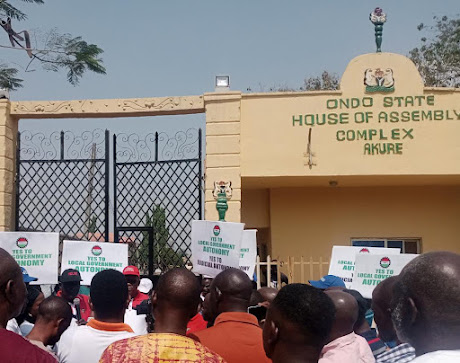 Workers under the body of Nigeria Union of Local Government Employees, NULGE, Ondo State branch have protested what they claim is an attempt by legislators to vote against local government autonomy.

The protesting employees who shut down the state House of Assembly complex on Tuesday in Akure, the state capital, warned that they will boycott the 2023 election if the legislators fail to vote in favour of autonomy.

They also threatened that they will halt the state’s social, economic, and political activities until they accede to their demand.

Some of the inscriptions on the placards displayed by the workers included “Yes to LG autonomy,” “Yes to judicial autonomy,” “No autonomy, No vote,” and “On autonomy we stand.”

Comrade Bola stated that Ondo State should be one of the last states to ratify the LG autonomy bill since 16 states in the nation have already done so.

Abimbola Babalola, national vice president of NULGE, emphasised the need for an autonomous local government system and asked the state’s legislators to take the necessary action by voting in support of the bill.