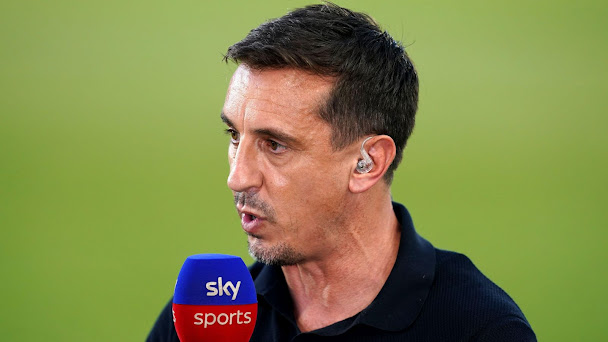 Former Manchester United captain, Gary Neville, has hit out at France forward Ousmane Dembele for his performance during his side’s 2022 FIFA World Cup final tie against Argentina on Sunday.

Neville branded Dembele’s display as ‘pathetic’ and ‘embarrassing’ as the Barcelona star was exposed by Argentina winger Angel Di Maria in the World Cup final.

During the first half of the match, Dembele gave away a penalty before being hauled off before half-time by France head coach Didier Deschamps.

Dembele had his head in his hands as he clumsily brought down Di Maria in the box, with captain Lionel Messi converting from the spot-kick to give Argentina a deserved lead.

Assessing Dembele’s display at half-time, Neville told ITV Football: “It is pathetic [from him].

“Di Maria’s position has stretched Jules Kounde and the French team, they have not come to terms with it. It is a genius selection from the manager, so well done to him.

“Dembele, I know he is a wide player, but honestly, that challenge… We know what he is going to do Di Maria, he has been doing it for ten years.

“It is embarrassing for him. I am a little bit torn because it is a soft penalty, but you deserve to be found out because of the stupidity of the challenge.

“Dembele gets found out because he gives Di Maria the opportunity. Dembele gets played like a little boy, to be fair.”