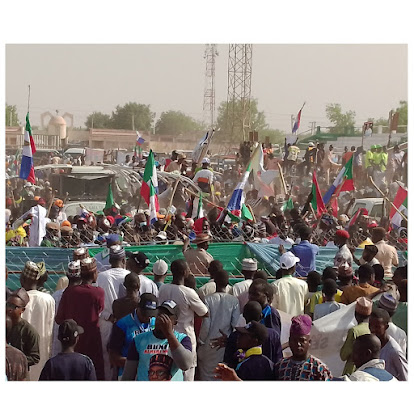 Yobe State Governor, Mai Mala Buni has received more than 250 members of the Peoples Democratic Party, (PDP), who defected to the All Progressives Congress, (APC) in Fune local government area of the state.

Receiving the decampees, Gov. Buni, represented by his Deputy, Idi Barde Gubana described the development as a great loss to the opposition.

He assured the new entrants that the party would accord them equal rights and opportunities as other members, saying the “APC believes in one united Nigeria, contrary to PDP”.

In his remarks, the state party chairman, Mohammed Gadaka who congratulated the defectors for joining the ruling APC, urged members of other political parties in the state to follow suit to move the state forward.

A former PDP executive member in Fune local government, Mallan Iliyasu Adamu Jilum who spoke on behalf of the defectors said their decision to shift their loyalty couldn’t have come at a better time.

Highlights of the occasion were the presentation of APC flags to the new entrants by the State Deputy Governor supported by state party Chairman, Mohammad Gadaka.